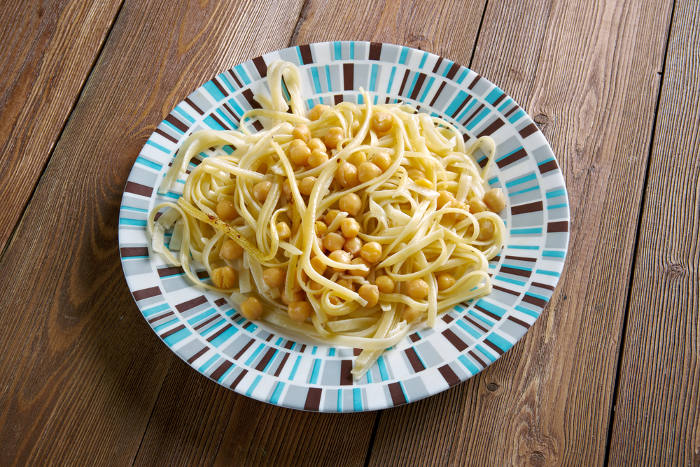 The Salento cuisine from the south of Puglia has very many dishes that recall ancient peasant culinary traditions. One of the most traditional recipies is without doubt Ciceri e tria (fried dough with chickpeas) a real gastronomical must if you find yourselves here in Salento on holiday. Usually, you can eat this dish in the typical inns of the Salento inland. When you are asking for this dish at a restaurant don’t ever say fried dough with chickpeas please: they would never understand you at all! Ask for “ciceri e tria” instead in the real spirit of the land.

The origins of “Ciceri e Tria”
The story of this dish has very old roots, in fact Horace, the Latin poet, spoke about it in his famous work Satires, written between 35 and 30 B.C. The poet spoke about a soup made with leaches, chickpeas and lagane that according to some reconstructions should be a kind of pasta very similar to fresh pasta that is made in many homes in Salento. With the years, instead of lagane, “tria” is used, which is a dry pasta. Even if this dish has now entered menus in many restaurants in Salento that cook typical dishes from the local tradition, once “Ciceri e Tria” was the typical dish cooked on the 19th March, Saint Joseph’s day. It is a very simple dish made with poor ingredients that belongs to the cucina povera (poor cuisine) culture completely.

Preparation
To begin with, as tradition dictates, the “tria” is prepared by hand mixing semolina and flour with warm salted water. You must knead it until you get a dough that you will leave under a humid cloth for about half an hour to rest. Once this is done you will divide the dough in various pieces and roll out each piece with a rolling pin. This way you will have made various pastry sheets that you will carefully cut and fold making the actual tria. The night before you will have placed the chickpeas in water with some bicarbonate of soda (for at least 10 hours). After this you will wash the legumes and cook them with water and the bay leaf. When they are cooked half way take them off the fire, drain them and place them in another saucepan full of boiling water in which all the other vegetables have been added. Taking good care of the chickpea situation, fry the tria in abundant oil. But be careful, only a part of the pasta will have to be fried the rest will be cooked in boiling water with salt as usual. Once it’s all cooked, add the fried tria and the chickpeas and add pepper.

A dish you must absolutely try when you come to this part of Puglia.