Today’s question was asked by Guido and it’s relative to movements towards the sea in Salento in August: how do I move about? Will I find traffic? Here’s my answer, but before I must explain the opening photo. It’s a photo I took from my mobile phone while I was going to my sea, yes: it can happen that a flock of sheep interrupts your trip. They are the rhythms of Salento.
“hello fabio, I see that you are an expert on the area and therefore I wanted to ask you some tips. I would like to spend about ten days in Salento in August near Nardò at Santa Maria al Bagno (I haven’t booked yet) […] I was wondering will I be able to move around from there or is it all blocked seeing as it is August (for example going to Torre Lapillo or Punta Prosciutto or Torre San Giovanni) do you think it’s possible.. otherwise I would divide the holiday on two locations to be nearer but then I’d have the problem of finding 5 days in one place and 5 days in another.. In other words, is it possible to go around in August? How much time does it take to go from one town to the other… Thank you and if you have any further information it is always very welcomed.”

Map of the traffic areas in August 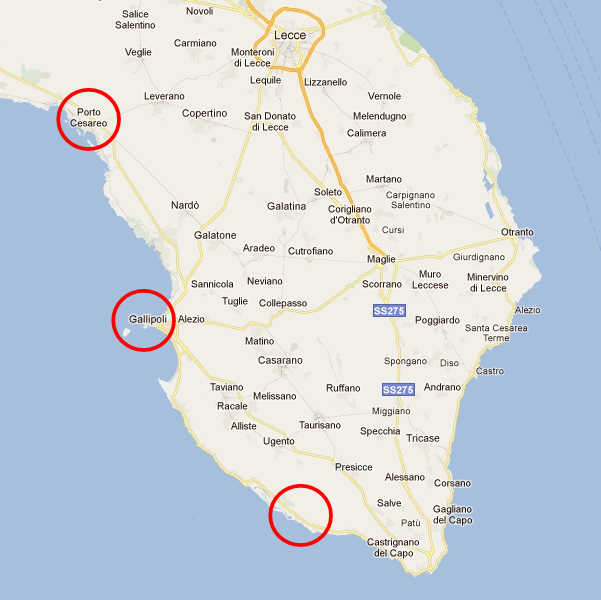 Well then, this is the situation: the two mid August weeks: all blocked! Nontheless, Santa Maria al Bagno is without doubt a good spot because it is in the middle between the two most famous sea locations of gallipoli and Porto Cesareo (where there is more chaos). I took a screen shot from Google Maps to indicate the hot spots, previous image: Porto Cesareo, Gallipoli (discover where are the best Gallipoli beaches) and the sandy coast near Torre Vado where Maldives of Salento are. In the two weeks of August these places are packed with local people and tourists because of their beautiful beaches. In that period you will find traffic on the inland roads that lead to the sea, flowing traffic that will increase gradually as you get closer to the coastal road. The first block is usually found when you enter the coastal road, here you will risk driving for a few minutes at a snail’s pace under the hot August sun. Once on the coastal road you will drive at a slow pace in the direction of your favourite beach. For example, on a Sunday I found a cue at the entrance to Torre Lapillo from the San Pancrazio road, the following photo was taken from my car while I was stuck and listening to the radio. This is the situation but: the traffic can be avoided. Here are my tips.

Read also: Where can I find the beaches of Porto Cesareo, Torre Lapillo or Punta Prosciutto? 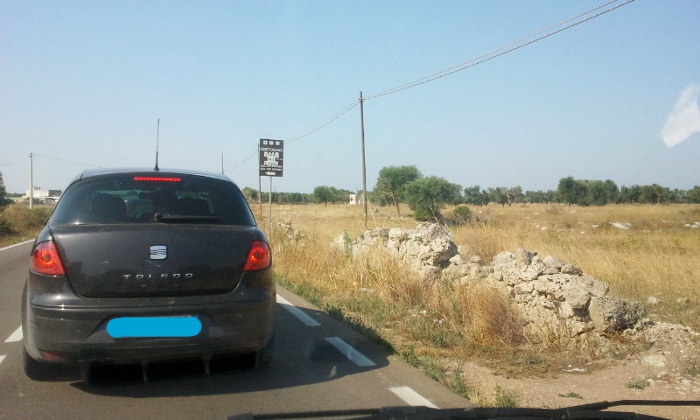 1. The time is the most important thing
The time in which you move is important. Avoid the time in which everyone moves to go to the beach (10:00-12:00) and when they all go home (18:00-19:30). Above all, the return time is important or you may find yourself stuck! Be strategic: you either anticipate the time to go to the beach or you postpone it and enjoy the sunset on the sea that on the Ionian side is fantastic.

3. What if you avoided using the car?
If you can, go to the sea on foot or by bike and you will free yourself of any stress. In my opinion it is better to walk 500 metres on foot than half an hour of traffic under the sun.

When to take the car then?
You should only take the car when you want to go and visit other beaches in the area. Then, the previous rule applies: choose the perfect time to go and come back. A part from the general hours of chaos, during the rest of the day it is easier to move by car. If you have to go further, my advice is to take into consideration roads that run inland and that are often parallel to the coastal road. For example: if I want to go from Torre lapillo to Gallipoli. I have two options: (1) I drive along the inland road; (2) I drive along the coastal road. Number 1 is more flowing. Number 2 is the more beautiful one because you can see the beautiful views overlooking the sea of Porto Selvaggio, but it is also slower. You can’t have everything in life! The choice is up to you.

In synthesis: let’s say that driving on the coastal road during the day isn’t ideal in the two middle weeks of August. The first and last weeks of August are less chaotic but bear in mind that always more people come to Salento every year, you may read Where do Italians go for summer holiday and why. In August try to keep the car parked, find a dwelling on the sea and go to the beach on foot. You will relax and avoid driving in traffic. If you really can’t avoid driving bear my three tips in mind. Be strategic and leave a little earlier or wait for the sun to set on the seaside which is fantastic. As for the inland there is no problem with traffic, for example going to Lecce is fine, like going to visit the various towns to go and see the pizzica or to eat in the cheap local restaurants. Have a nice trip.