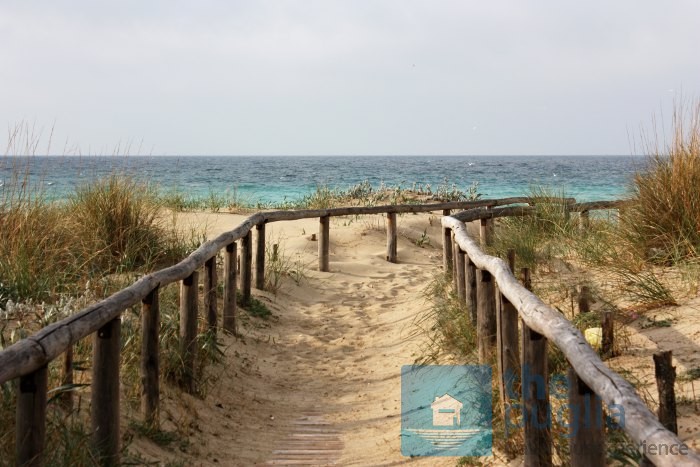 A piece of nature and Puglia sea you must see when you are in the area spending your holidays, is the Salt mine and the Torre Colimena Dunes (Palude del Conte and Dune Costiere) in the natural reservation of the Litorale Tarantino Orientale. The salt mine is called Salina Vecchia or dei Monaci and is just north of the Torre Colimena for about 25 hectares of size.

It is a depression closed by dunes towards the sea and by small hills towards land in which there is sea water. In the past the water poured in by the coastal storms then it was regulated with wooden sluices, in some places you can still see where they were placed. The salt mine was there in prehistoric ages and together with other similar places around the area, it is thought to be inspiration for the Romans to call the area … Salento, namely a place that has salt. Just before the sea there is a beautiful sandy beach that you can visit freely: it is the beach for those who go to the Torre Colimena sea. I will leave you to some photos taken on a particularly rough sea day with a cloudy sky and after the photos I will take you back to the text of the information sign at the entrance of the salt mine for those of you who wish to know more about the area. 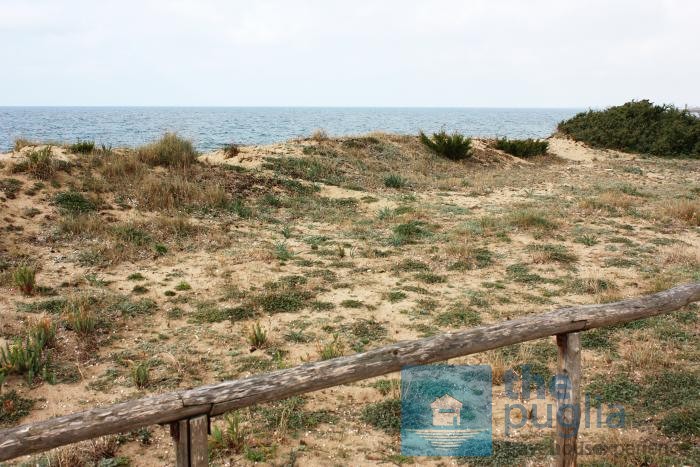 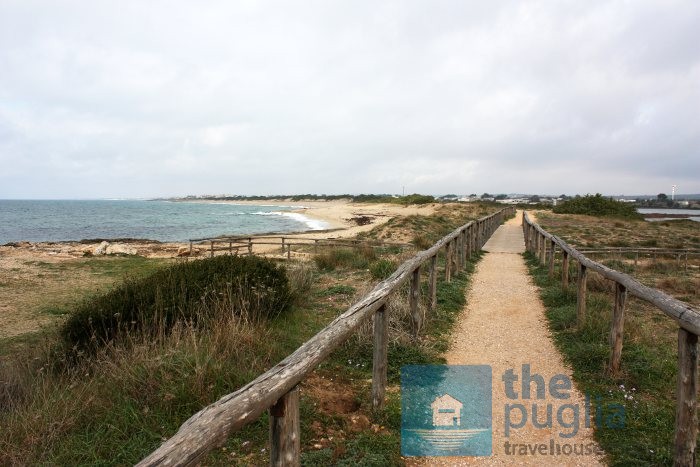 Text of the information sign
For the Romans, salt was a source of great richness and they would use the income to rebuild the treasury funds in moments of great difficulty. Later, it was owned by the Saracens but then, in some way, it came into possession of the Mandurians again that in 1464 gave it to Ferdinand of Aragon. The Salt mine was surrounded by countryside that belonged to the monastry of the Cassinesi fathers of Saint Lawrence of Aversa who in 1754 were granted ownership rights. The production of salt continued till 1812 but from the Catasto Oniciario period the buildings were used as masseria because live-stock rearing was the main activity. The salt Deposit is located on the centre north side of the lagoon and is made of a large building with a square structure divided into three rectangular compartments of different sizes all made with squared off tuff ashlars. These rooms are covered by barrel vaults and have pavements in sheets of calcarenite and are convex to enable the easy draining of water from the lumps of salt that were placed on the higher middle line. Next to this building there is the crumbled tower composed by two rooms on top of each other. It has a square foundation of about 10 metres each side and is about 12 metres high. At less than 100 metres from the deposit there are the ruins of the chapel dedicated to the Madonna del Carmelo and dates back to the 16th century. This area, in which the residual salt shows up and shines under the rays of the summer sun, is the last testimony of the salt mines that were present on the coasts of Salento. It has all the characteristics of marginal lands and is a rare example of the original landscape. The natural habitats are many as it is a piece of land decisively different and at times in contrast to the surrounding territory. In particular, the vegetation is represented by a circle of plants, unique in its genre, that come from the natural selection caused by the elevated saline content of the mud. Only plants with a high development of acquiferous parenchyma, namely plants with tissues made of cells with large vacuoles that can contain water solutions with many ions derived from melted salts, survive.

This beach can be easily accessed in 10 minutes by car if you are in Porto Cesareo or in Torre Lapillo. Besides, it is only two kilometres away from the Punta Prosciutto beach. For further information about the area please visit the Riserva Naturale del Litorale Tarantino Orientale site.