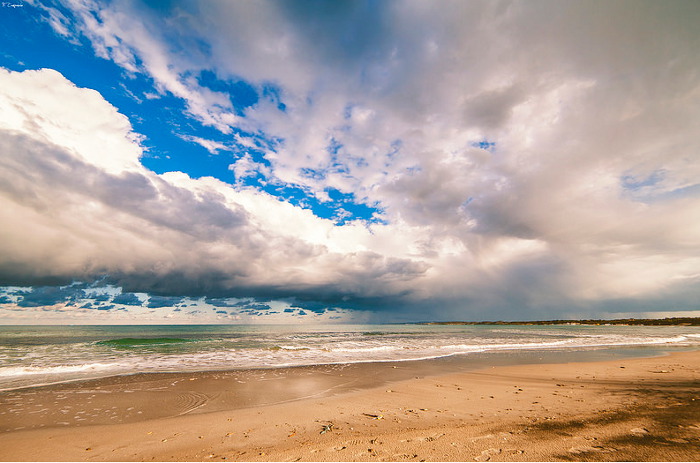 There’s a must-see place in Salento where you will find beaches, lakes and forests all together in one place. It’s called Alimini Beach or simply ‘Alimini’. It’s a beautiful beach north of Baia dei Turchi in Otranto which I recommended you visit during your holiday in Salento.

The Alimini consists of two small lakes close to Otranto and the Adriatic Sea: Alimini Grande to the North and Alimini Piccolo to the South (also known as Fontanelle). The lake water is salty, especially in Alimini Grande which is directly connected to the sea. However, the two lakes are also fed by many fresh water sources, most importantly the Zudrea and Rio Grande. The lakes are shallow and surrounded by luxurious vegetation including Mediterranean scrub and pine forests. The area is of great natural importance because it constitutes a reserve and a stopping point for various migrating birds such as white storks, flamingos, cranes, greylag geese, swans and many others.

The area is also important because of its beach which has over five kilometres of fine, white sand bordered by dunes and Mediterranean scrub made up of myrtle, laurel oak and juniper. Behind the dunes, lies a pine forest which separates the sea and beach from the two lakes. To get to the beach, you need to park in the designated areas along the SP366 coastal road and follow the walking trails through the pine forest. The beach is narrow, as are most in Salento. There you will find beach facilities, especially in the section just north of Baia dei Turchi. There are also free beaches as you go north towards Torre Fiumicelli and beyond. The sandy beach terminates just before Conca Specchiulla while the pine forest continues on toward Sant’Andrea, where spectacular rock sea stacks can be seen. To give you another point of reference, Frassanito is in the same area and the nearest inland towns from the beach are Cannole, Borgagne, Serrano and Carpignano Salentino. There are many campgrounds, resorts, farm stay accommodations, holiday homes and rental villas for those wanting to stay close to the Alimini Lakes. Otherwise, you can stay in in Otranto. From there, you can easily reach the beaches by car. I recommend you read this post of mine: 3 things you must see in Otranto

Facts about the Alimini Lakes
1) Thick vegetation grows around the lakes, including Utricularia australis (‘erba vescica’ in Italian) which is a carnivorous plant! The plant is covered with very fine hairs. When an insect touches these hairs, a part of the plant is triggered which captures the insect inside (if you have more information on this, please share it in the comments).
2) Close to the beach lies the wreck of the Greek bulk vessel Dimitros, which got trapped in the Alimini shallows on 19 December 1978, laden with cereal. It is located in front of the I Due Mori beach facilities.
3) Baia dei Turchi is part of Alimini Beach. According to legend, it’s the point where Turkish pirates made landfall in the XV century before laying siege to nearby Otranto.