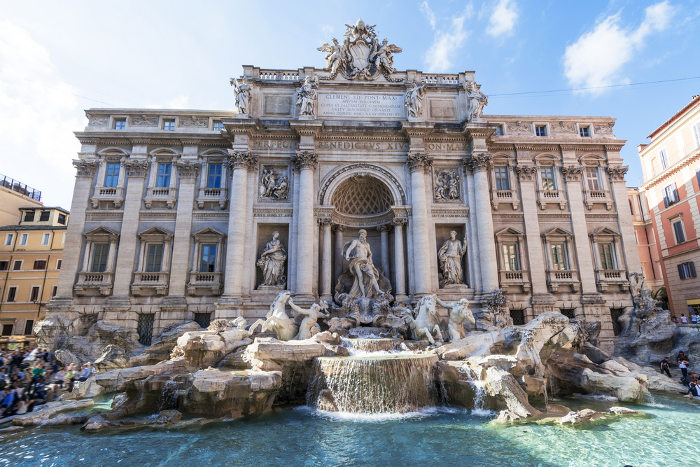 What can I say? It doesn’t matter where you’re from in the world, when you speak about the Trevi Fountain you get a little feeling of home. Doesn’t Fellini’s La Dolce Vita mean anything to you? Marcello Mastroianni with Anita Ekberg? I’ll be talking about the facts and traditions around the Trevi fountain in another post, but for now let’s take one step at a time: where exactly is the fountain? What period does it date back to? What do the sequence of the statues around it, the inscriptions and the niches all tell us?

Where is the Trevi fountain?
The Trevi fountain is located right in the heart of Rome. The nearest metro stop is Barberini. If you enjoy walking you can take a beautiful route from Barberini which takes you to the Quirinale and to the Fountain, and from there to the Pantheon, then to Piazza Navona, ending up at Montecitorio and Via Condotti if you fancy a bit of shopping. You’ll love the atmosphere in this part of Rome!

History of the Trevi fountain 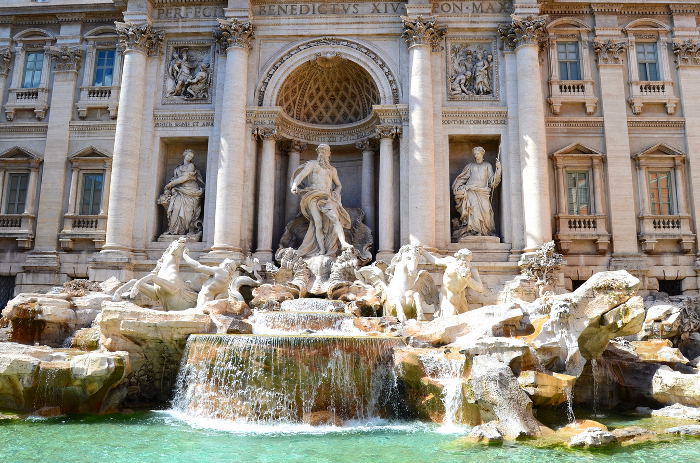 Like everything else in this city, the Trevi fountain has been around for a long time. Even though the fountain was inaugurated in 1735, this corner of Rome has a history going back thousands of years. We need to first go back to the Aqua Virgo, one of the ancient Roman acqueducts which still functions today. The end point of the Aqua Virgo is on the eastern side of the Quirinale right next to where a number of streets converge. In those days the spot was actually called a treio: as three streets meet there (and this is probably exactly where the name Trevi came from). The fountain was originally constructed right in the middle of this intersection, with its three mouths pouring water into three separate, adjacent basins. In 1453, on the instructions of Pope Niccolò V, Leon Battista Alberti replaced the three basins with one single one – bigger and rectangular. But we still haven’t got to the present fountain. It would need a number of other Popes to get to the one we see today … 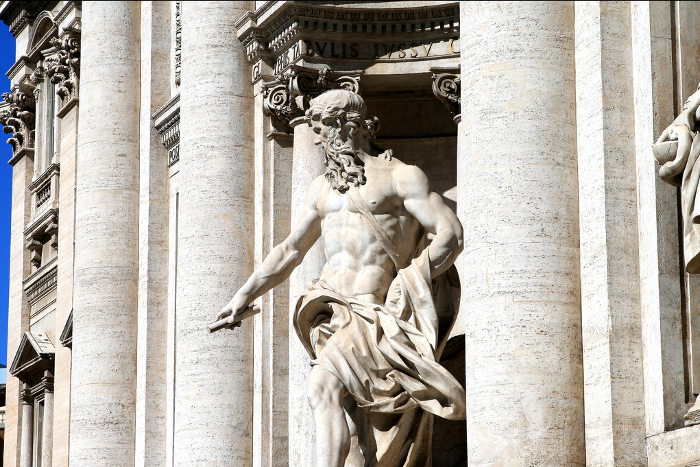 Building and modifying the fountain continued through successive centuries, always at the behest of the popes. In the second half of the 15th century Pope Urbano VIII ordered Gian Lorenzo Bernini to transform the whole square and the fountain into a spectacular attraction right close to his family home, Palazzo Bernini. The Pope also wanted it to be visible from the pontifical residence – the Palazzo del Quirinale. In Bernini’s plans there was a grandiose water show, he widened the intersection, and demolished several houses to the left so he could re-orientate the fountain to face towards the Quirinale. However, lack of funds forced the project to be abandoned as did the death of Pope Urbano VIII and a court action against the Barberini family. Successive Popes had the problem of what do to with the Trevi fountain but every project put in place was abandoned. In fact, the family of Pope Innocent XIII purchased some buildings right behind the fountain and so did not want any changes to the state of affairs. Nothing was to hinder progress of the creation of his new noble residence.

It’s in 1731 that the Trevi fountain returns centre stage thanks to Pope Clement XII. He announced a competition to build a large water-based monument. The competition was won by Nicola Salvi, but neither he nor the Pope were to see the work finished. The fountain was eventually completed thirty years after the death of Pope Clement XIII. The work represents a sea scene. There is a large with a statue named Ocean in the middle. Ocean is driving a carriage in the form of a shell pulled by two winged horses that are, in turn, guided by mythical tritons. And then there are the niches; and statues named Health, and Abundance; bass reliefs; Corinthian columns, and a commemorative plaque to the Pope, of course:

Someone of you can translate, please?

The second picture is by David McSpadden. The third picture of Ocean statue is by Justin Ennis. 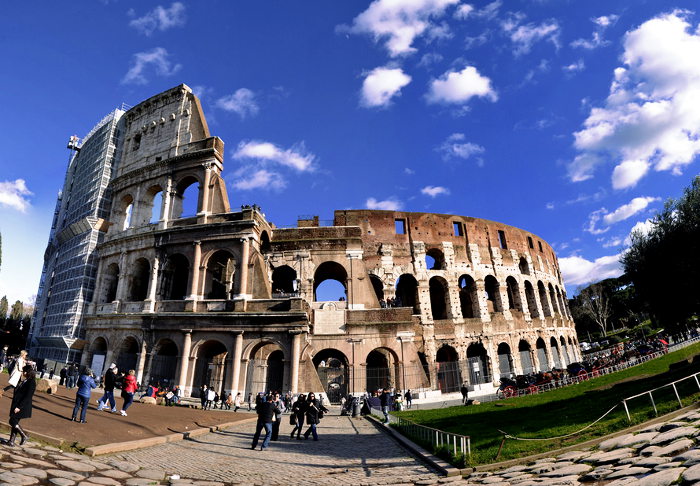 If you want to go deep into the knowledge of the Roman Colosseum, here are some information about its architecture. I am going to introduce you to the structure of the Colosseum, the arena, the seats and the cellars. The structure of the amphitheatre is made of blocks of travertine (external walls and load-bearing pillars), bricks and blocks of tufa (radial walls and stairs). The exterior of the building is divided into four levels that add up to a total height of about 50 meters. The last level was crowned with a marble colonnade, whose fragments are still visible on the ground floor. Just walking around the Colosseum, you can see that the building has an elliptical shape with a long axis of 188 metres and a short one of 156 metres. 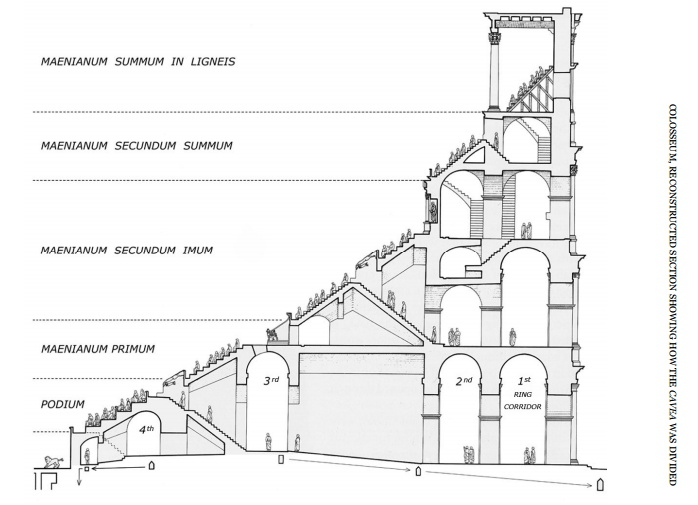 Now, we get inside. In the centre of the building there was the arena, a wooden floor (now partly reconstructed on the eastern side) on which the games took place and that was covered with sand (arena in Latin). If you visit the Colosseum, the arena is not sandy, but you will see what was underneath. The amphitheatre had 80 archways: 76 entrances were numbered and intended for the spectators while four ones, located on the ends of the ellipse’s axes, were reserved for the emperor, for the political and religious authorities and for the protagonists of the spectacles. The monumental entrances on the short axis led to two royal boxes near the arena, one of which reserved for the emperor. On the occasion of the spectacles the public took a seat according to a rigid division based on social classes: a ticket indicated the seat assigned and obligatory pathways led to the tiers of seats (cavea) through numbered archways.

The cavea, that could contain between 40.000 and 70.000 spectators, was divided into 5 horizontal sectors (maeniana), separated by corridors. The senators occupied the section of seats closest to the arena (podium). The upper stands were reserved to the knights and to other social categories, whereas the highest columned sector (summa cavea) was designed for the plebs and furnished with wooden structures. Like many of our modern sports arena, also the Colosseum had a kind of parasol: on the top there was a mobile structure in wood and cloth (velum) to shelter the public from the sun. 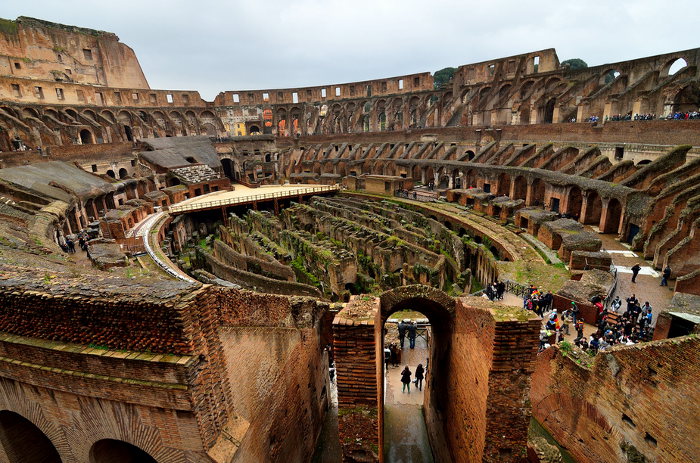 Originally, the building structures today visible in the middle of the monument were cellars, covered throughout with the floor of the arena, like I have said before in this post. They were built mostly some years after the amphitheatre’s inauguration, under Domitian’s empire (AD 81-96) and were restored several times during the five centuries of the Colosseum’s activity. The cellars were organized into 15 corridors, made in blocks of tufa and bricks, parallel to a central gallery running east-west along the long axis of the ellipse. The cellars housed the equipment needed for the games, the weapons and the cages of the animals. A system of goods-hoists moved by winches was used to lift gladiators, animals and stage machineries just below the level of the arena, which was reached through trap-doors and inclined planes. The goods-lifts set along the side corridors, the largest ones, were equipped with cages for hoisting the animals; instead, those located in the middle cellars were used for people and scenographies. The housings of these machineries and of the load-bearing poles of the arena are still visible on the cellars’ floor. The central corridor under the arena continued underneath the eastern entrance, connecting the cellars with the most important barracks of the gladiators, the Ludus Magnus, today partially visible in the archaeological area between Via Labicana and Via di San Giovanni in Laterano. Another underground corridor, known as Passageway of Commodus (the emperor who, according to historical sources, underwent an attempted assassination there), connected the cellars with the outside; the gate leading from this passageway to the cavea is still visible today near the terrace on the southern side.

Follow me, I am going to write a lot about Rome! The historical information in this post are taken by the Soprintendenza Speciale per i Beni Archeologi di Roma. The first pictures is by Luca Serazzi, the second one is by Jvieras. 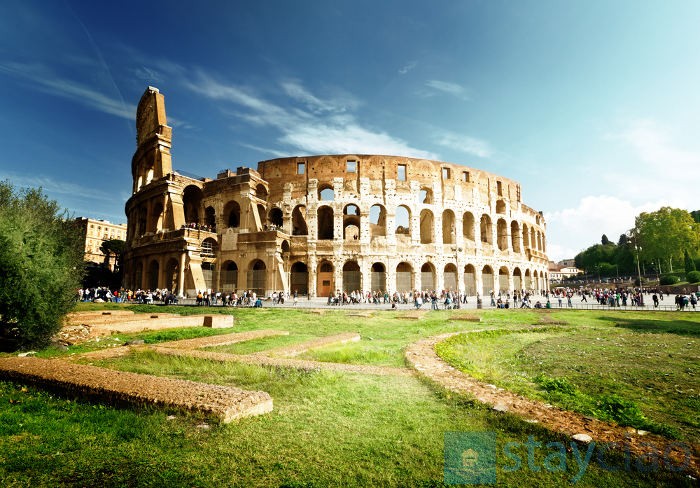 When we talk about holidays in Italy, usually we mean in Rome. And when someone comes to Rome, what’s the first thing they think of? The Roman Colosseum, the symbol of the Eternal City and of the whole of Italy. For this reason this blog is starting its journey to explore Italy right with the Colosseum and its history dating back thousands of years. It’s not only important for its size and magnificence but also and above all for what it represented in Ancient Rome: games and acts of violence against men and animals from all over the Roman Empire.

History of the Colosseum 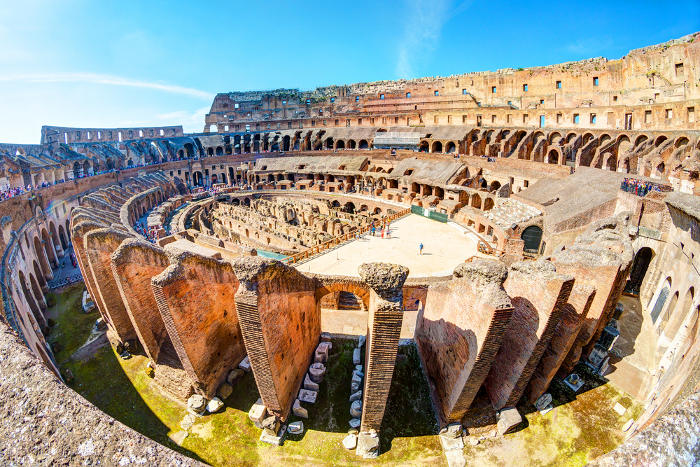 The Colosseum was built by Emperor Vespasian on part of the site of Nero’s Domus Aurea (Golden House). Vespasian lived to see the completion of the first two floors. It was inaugurated in 80 AC by Tito, Vespasian’s successor, who added the third and fourth tiers of seating. On its inauguration Tito staged games which lasted all of 100 days during which over 5,000 animals were killed! Then Tito’s successor, Emperor Domitian made further modifications, completing the whole building with the addition of all the structures underneath the arena itself. After the completion of the works it was no longer possible to stage naumachia (reenactments of naval battles) in the arena, which had been a feature of the preceding era. During the Imperial age, the Colosseum played host to the largest and most cruel spectacles of the whole of Rome’s history. In 217 there was a fire which caused parts of the upper storeys to collapse and led to the closure of the amphitheatre for five years. With the end of the Empire, the Colosseum fell into decline: it was abandoned, reassigned as a burial ground, damaged by earthquakes, and was used as a source of building materials – where large blocks of the tavertine marble were removed. It then became redesignated as a Christian place of worship and people even lived there. In recent times it has been reclaimed and subject to repeated and extensive restoration, made necessary by its very poor state of repair following centuries of neglect.

What does the Colosseum represent today?
The Colosseum was the largest Amphitheatre in the world with a capacity of 50,000 to 80,000 spectators. It was the stage for Rome’s Games. This list shows the extent of what went on there: animal fights (venations); killings of prisoners condemned to death by wild animals; other kinds of executions and fights between gladiators. Such activities had a set programme: morning was for animal fights or fights between gladiators and animals; lunchtime was when people were put to death; and the afternoon was for the gladiator fights. Imagine, tens of thousands of animals and gladiators died in the Colosseum! Gladiator fights took place right up to 400 after which only animal fights took place in the Colosseum.

What does the name Colosseum actually mean?
First of all I need to say that its original name was not Colosseum but rather Amphitheatre Flavio, having been constructed during the Flavian dynasty. It acquired the name Colosseum during the Middle Ages because of its close proximity to the Colossus of Nero, the enormous statue of Emperor Nero.

Where is the Colosseum situated?

The Colosseum is situated on the eastern edge of the Roman Forum. You can get there easily – look for the metro stop Colosseo on the B line of the Rome metro. Getting off here, you’ll be able to enjoy one of the most beautiful walks in Rome: from the Colosseum to the Roman Forum, the Circo Massimo, and on to the Capitoline Hill and Altar of the Fatherland also known as the national monument to King Vittorio Emanuele II.

The second picture of this post is by Viacheslav Lopatin / Shutterstock.com 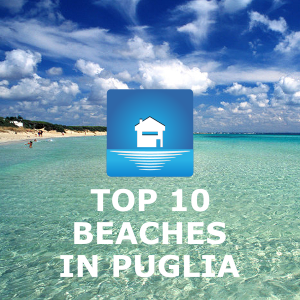